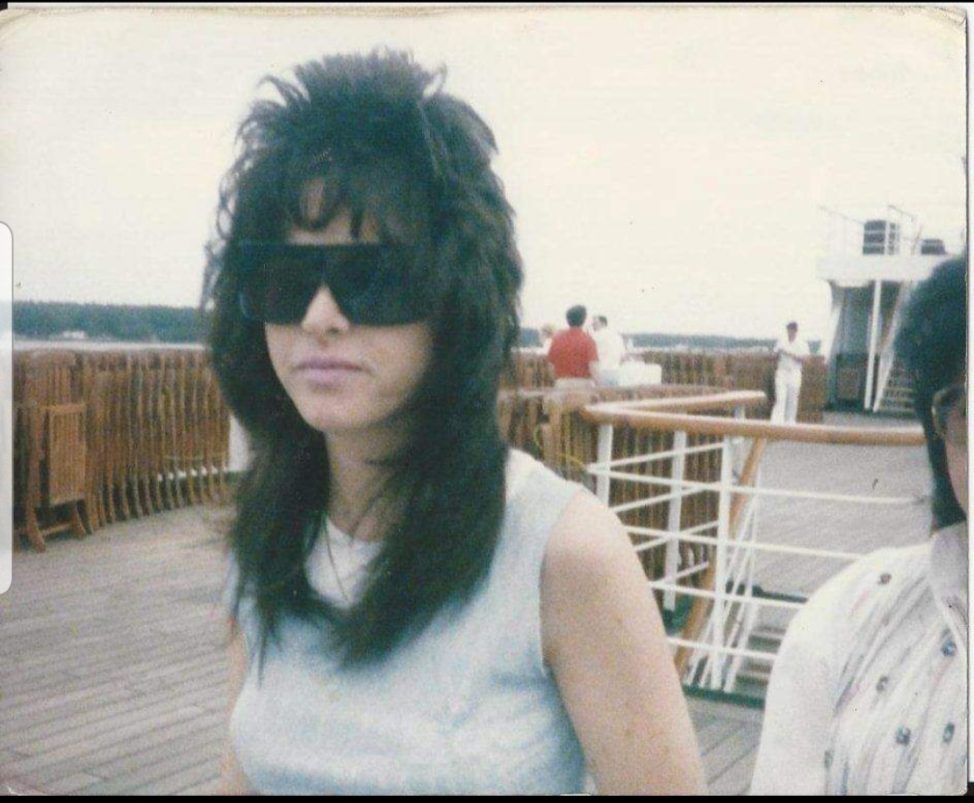 When Eric asked me to share the story of my first international trip, I dug up the journals I kept as a teenager.  Wow!  It brought back so many memories.  As a luxury and corporate travel planner (or a CIRE client), you can get a little spoiled when you travel…four and five-star hotels, upgrades and perks.  But not my first international trip!  Like many my age, I went on a “Teen Tour” to Israel.  This trip was in no way First Class travel.  Our group actually called it “The JCC Poor Tour!”  We stayed in youth hostels, homestays, camped in sleeping bags and stayed at just one hotel (4 to a room!).  It was terrifying, exciting, liberating and emotional.  Come take a walk down memory lane with me…

I’ll start out by sharing that I didn’t really come from a religious background.  I mean, I was “Jewish”, and we celebrated the big holidays and all, but my parents, grandparents, aunts and uncles never spoke much about religion or our family heritage.  And in the 80s, I was a teenager and not really interested in topics that didn’t involve my friends, music, or going to concerts.  (First concert: Ted Nugent.  My grandfather was actually personal friends with him!)

So you can imagine my surprise in the spring of 1983 when I found out I was being sent (shipped off!) to Israel for a month.  Now, some of you reading this probably went on one of these trips and there was a lot of planning and build up and you were really excited.  Not me…Hello, Left Field!  Also, I was going with a group of other teens that I had never met before.  Also factor in that, at 17 years old, I had never been away from home…not even to summer camp! 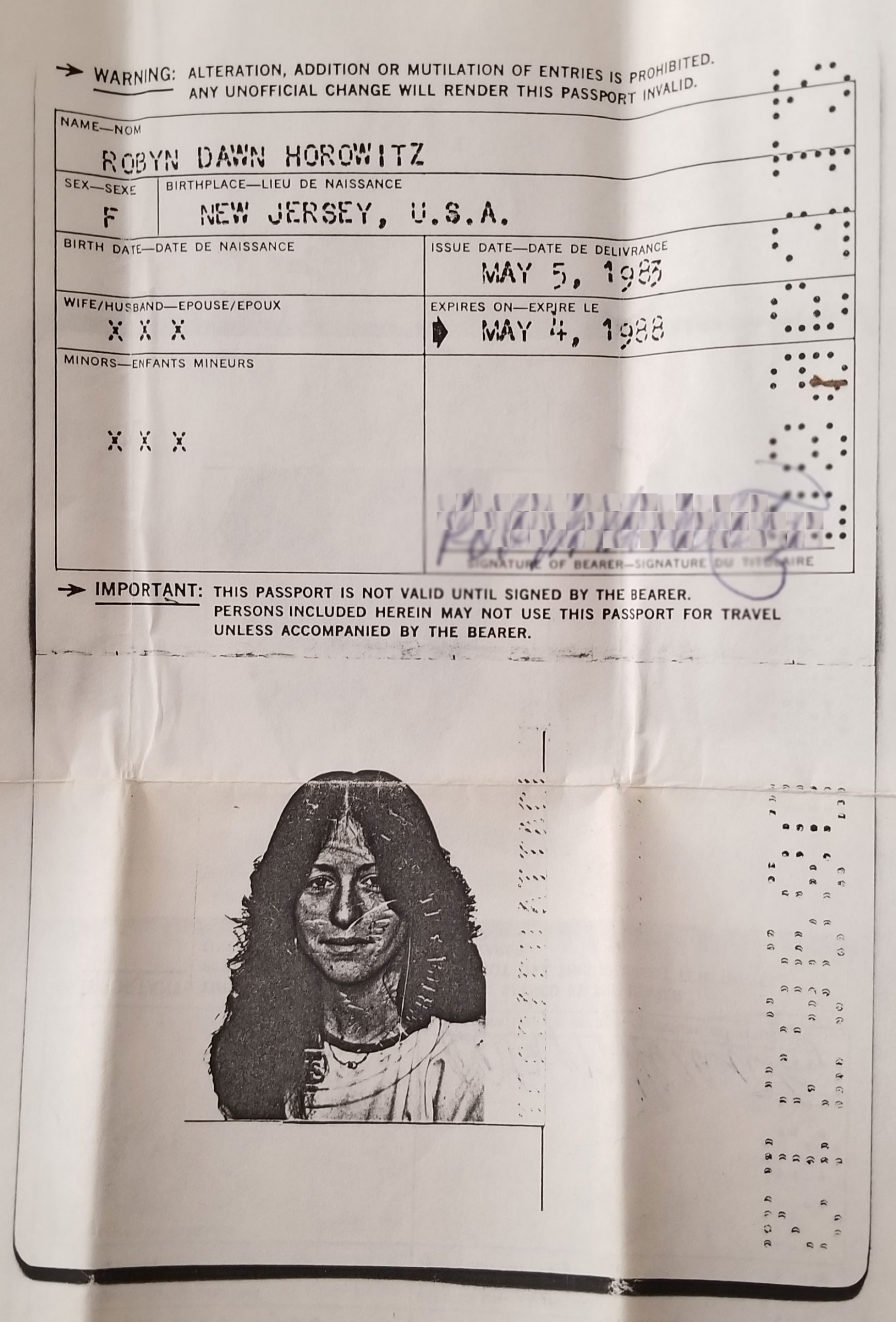 I set off at the end of June 1983 and the trip was off to a bumpy start from the get-go.  Literally!  The overnight flight from JFK to Tel Aviv was (looking back) the worst turbulence I have ever experienced in my life.  I was pretty scared on the flight.  When we finally landed, we were met at the airport by our guide who carried a machine gun, also something (scary) I had never experienced.  Then we were loaded onto a bus (no air conditioning!) for the hour-long ride to Jerusalem.  We arrived and quickly settled in before the start of Shabbat (what the heck was that?).

We started our sight-seeing in earnest with a tour of Galilee.  We traveled around the region and visited Carmel, Haifa, Western Galil, and learned about kibbutzim and settlements.  We also did a hike up to the border of the Galil, just above the valley of the Jordan River, and visited the Golan Heights with its many waterfalls and deep ravines.  The natural beauty was breath-taking.  I was far, far away from Jersey now. 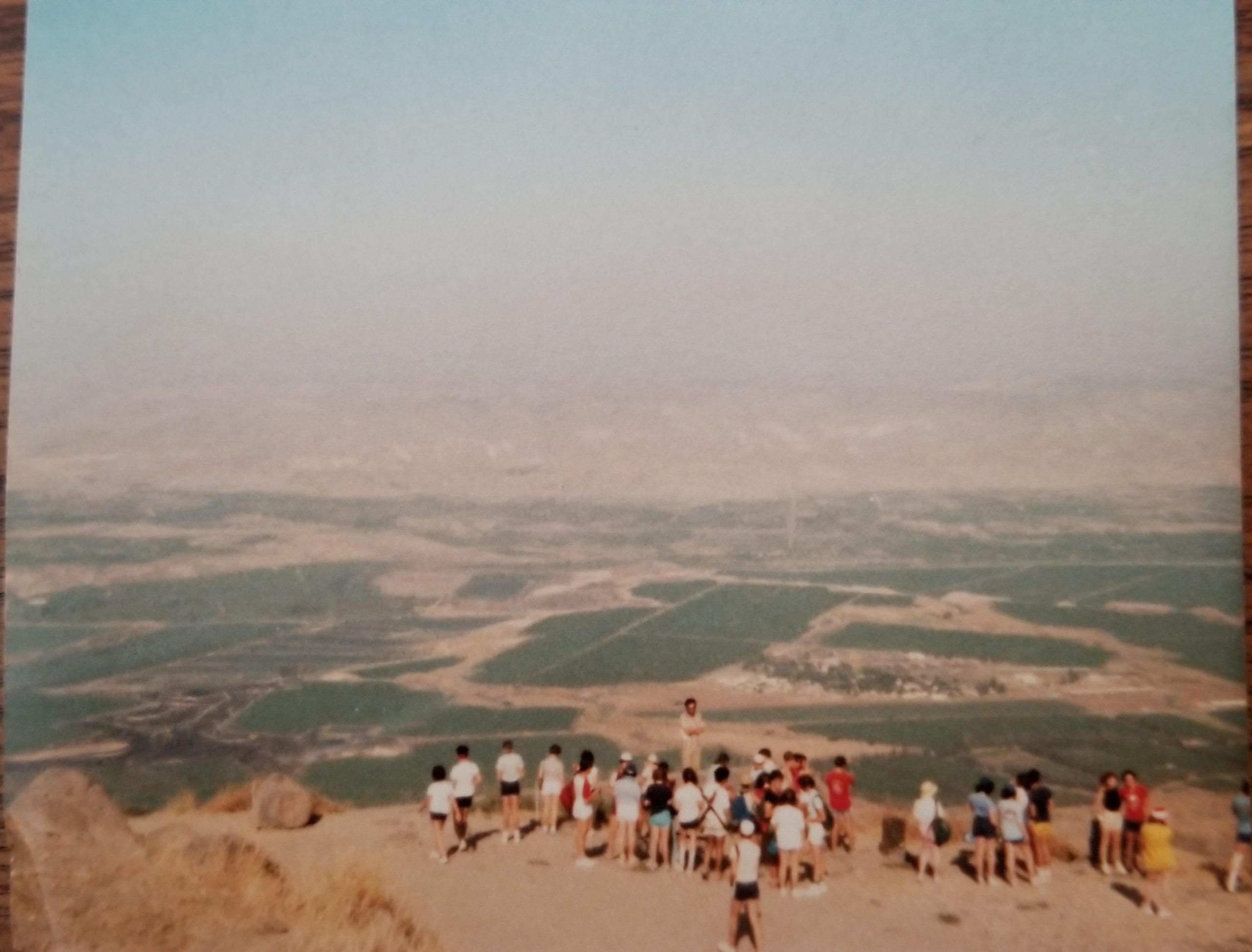 After the Galilee loop, our group split up and did homestays, living with families on a Moshav, another form of Jewish settlement that is a bit different from a kibbutz in that the members keep a relatively large degree of economic autonomy.  I stayed with a really nice family that had a son and daughter around my age.  I felt very welcomed.  Their tight-knit community was a lot like a suburban neighborhood and more modern than what I had expected (the kibbutzim are less modern).

After the Moshav experience, we visited Tel Aviv.  This was such a treat!  We got to stay in an actual hotel (as opposed to a hostel or a homestay) in an exciting, vibrant city.  By this point in the trip, I had made friends with three other girls and we spent a lot of time together.  We were all about the same age and no one had traveled internationally before.  And we were all Jersey Girls!  One night in Tel Aviv, we decided to sneak out and take the city bus to hit some clubs downtown.  Can you imagine how naive were we not to mention the trouble we could have gotten into (or worse)?  Ah youth…  Being a mom now, it kinda freaks me out. 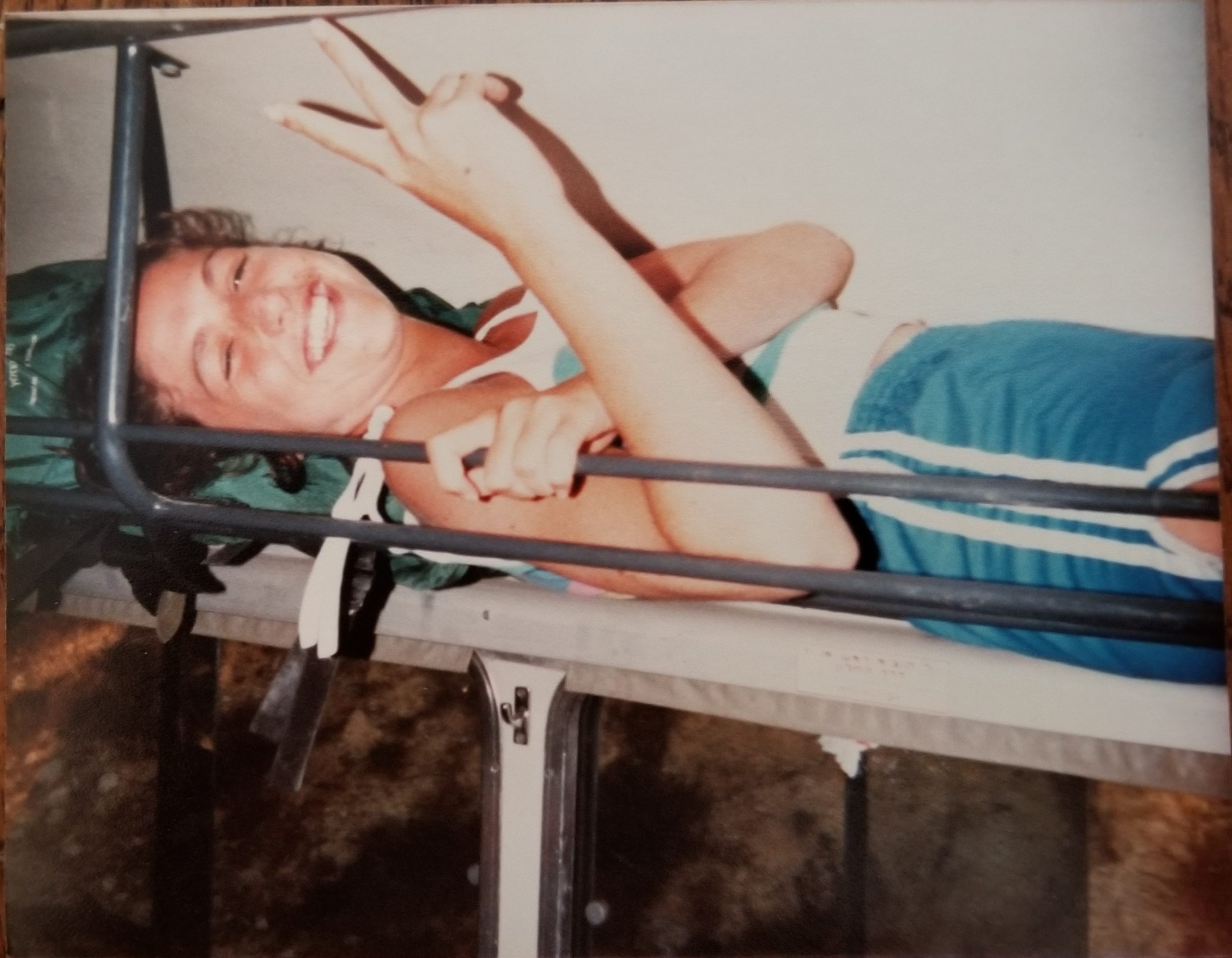 After a few days in Tel Aviv we headed back to Jerusalem where we visited the Wailing Wall.  To this day, I still can’t find the words to sufficiently describe my experience. I stood there for hours.  Even with little knowledge of my family heritage or my Jewish religion, the emotion I felt was indescribable.  I wrote down my prayer on a small piece of paper and managed to find a crack to slip it in.  I even remember what I wrote.  It was a prayer to bless all of my new friends, my friends from home, my family, and for good health.  I also wished that my parents would someday make this pilgrimage.  It had a profound effect on me.

Yad Vashem was also an experience I will never forget.  Yad Vashem is the World Holocaust Remembrance Center.  There were books upon books filled with family names and photos of those killed in the Holocaust.  It was so emotional and so much to process for a 17-year-old.  I remember the sadness and heaviness I felt, but I also remember the hope.  We all were able to plant a tree in memory of a loved one.  Planting a tree in Israel is a traditional way to express your sympathy and respect.  The spirit of the person honored lives on in the living memorial planted in their name.  I planted my tree in honor of my grandparents.

The next stops on the teen tour…ahem…JCC Poor Tour…was Ein Gedi Nature Reserve, Masada National Park, The Qumran Caves and the Dead Sea.  We woke up at 3 am one morning to hike up Masada, a UNESCO World Heritage site in the middle of the desert that was once home to an ancient fortress.  It’s a giant plateau and you can hike to the top via a winding path.  Even though we started early in the morning, it was ridiculously hot.  I still can’t believe I made it up (and down!) on foot.  What an accomplishment!  (I only found out later that you can take a cable car to the top.)  It truly was one of the most grueling physical challenges I’ve ever experienced.  The next day we went to the Dead Sea.  It was cool but really salty (you float because of the very high salt levels).  I mostly remember getting out and rinsing off immediately to wash all the salt off my body.

From there, we headed to Eilat.  Eilat was my favorite spot in all of Israel AND they had a pancake house!  (Direct quote from my journal.  The funny things that make you happy when you’re a teen…)  Eilat is located in southern Israel, on the Red Sea.  We overnighted on the beach in sleeping bags which was so cool.  We each had to take turns overnight with one of the guards watching over our camp site to make sure no one came up from the sea.  (Scary right!?)  Fortunately, by this time in the trip, we were used to the guards and the tight security.  I kinda appreciate it now, in hindsight! 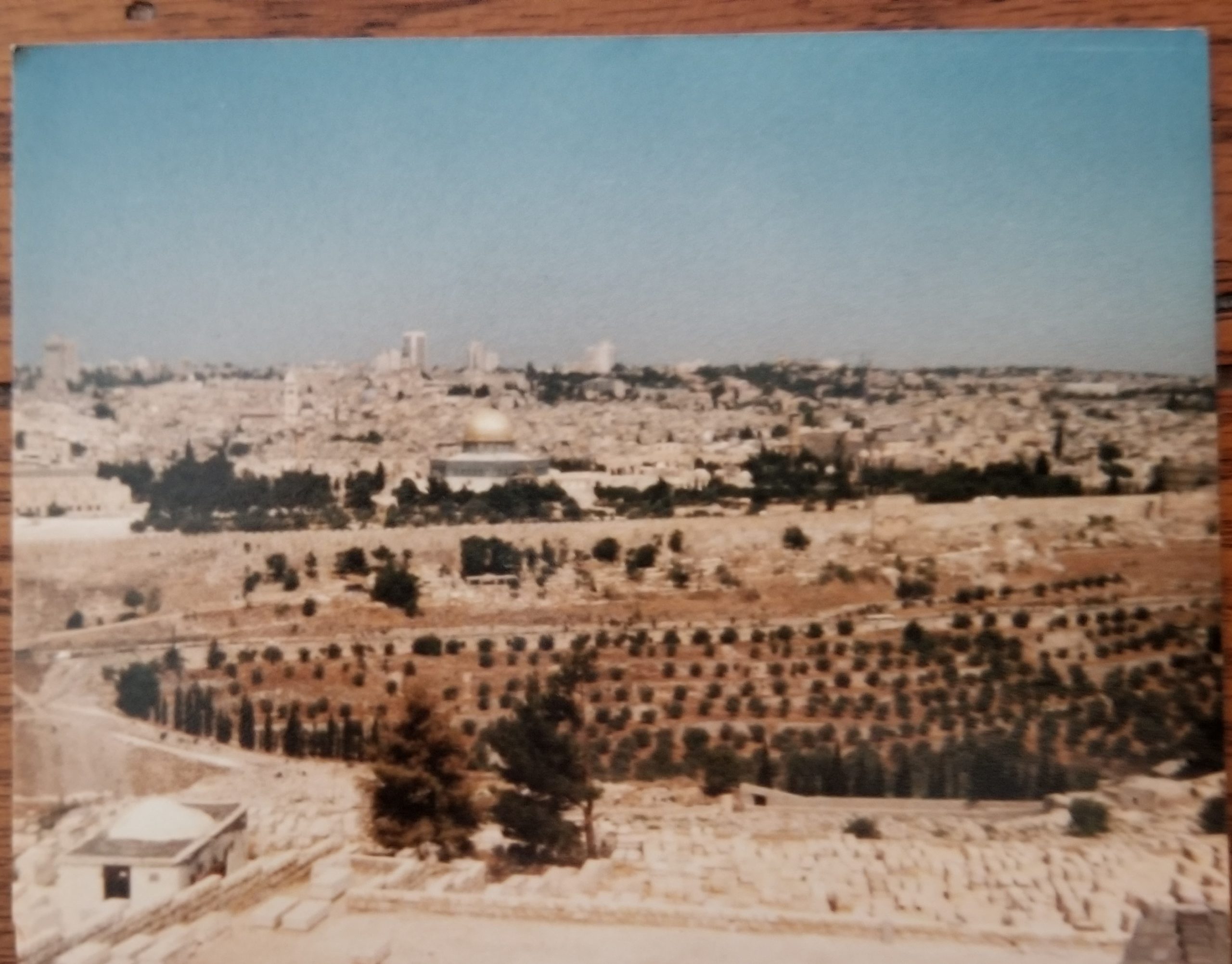 In the last days of the tour, we headed back to Jerusalem for more exploring before we headed home.  Three teens in our group decided not to go home but to stay on in Israel permanently.  I don’t remember all the details, but I remember their parents flying out and I remember that all three enlisted in the Israeli military!  That was so out of my realm of understanding at the time.  Israel still mandates that all citizens join the army for 2 or 3 years at the age of 18.  Can you imagine a Private Robyn Horowitz?  Neither can I.

One of the most poignant moments for me happened at the very end of the trip.  We returned to the Wailing Wall during those final days.  Our group leader’s husband had joined us by then.  He was a rabbi.  Right there, at the Wall, he performed a small ceremony for those of us that never had a Bar/Bat Mitzvah (me!).  It was so special.  Many of my friends from home had the big Bat Mitzvahs with parties and DJs and food and presents.  Not me.  But I wouldn’t trade my Bat Mitzvah experience for any of those things.

The month flew by and we were homeward bound in early August.  This incredible adventure, sometimes scary, sometimes exhausting, all the time enlightening, was a first step towards my career in travel.  Even though I didn’t think so at the outset, what a great gift this was.  Thank you, Mom & Dad.