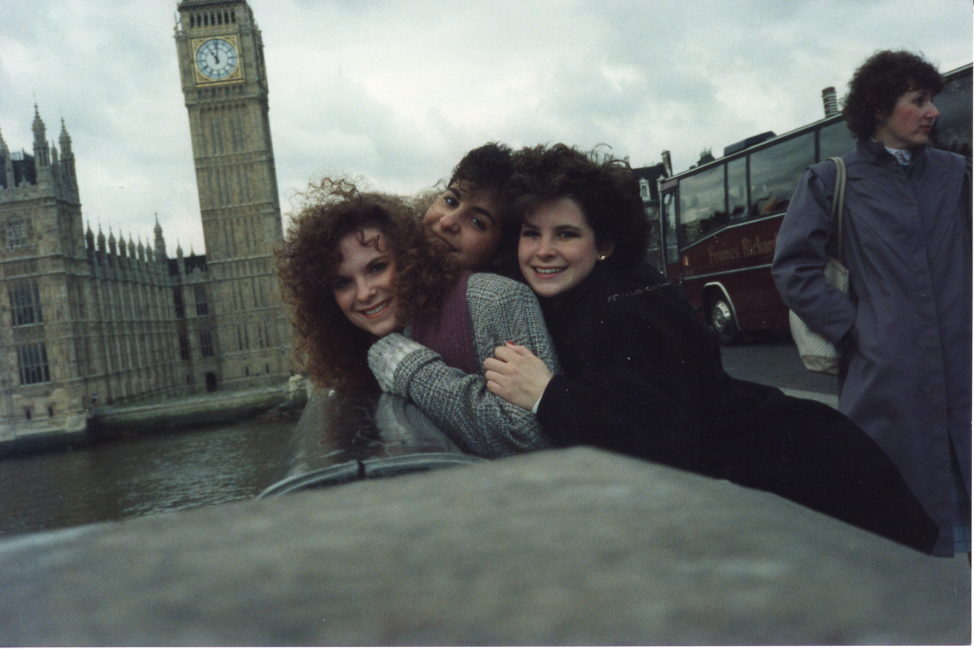 Well, I have a lot to live up to after reading about Esther and Robyn’s first international trips.  There will be no chicken impersonations, no famous rock bands, no machine guns, and no hiking (heaven forbid!).  But there will be romance, intrigue, a near-death experience, and an averted international incident.  But don’t expect too much. 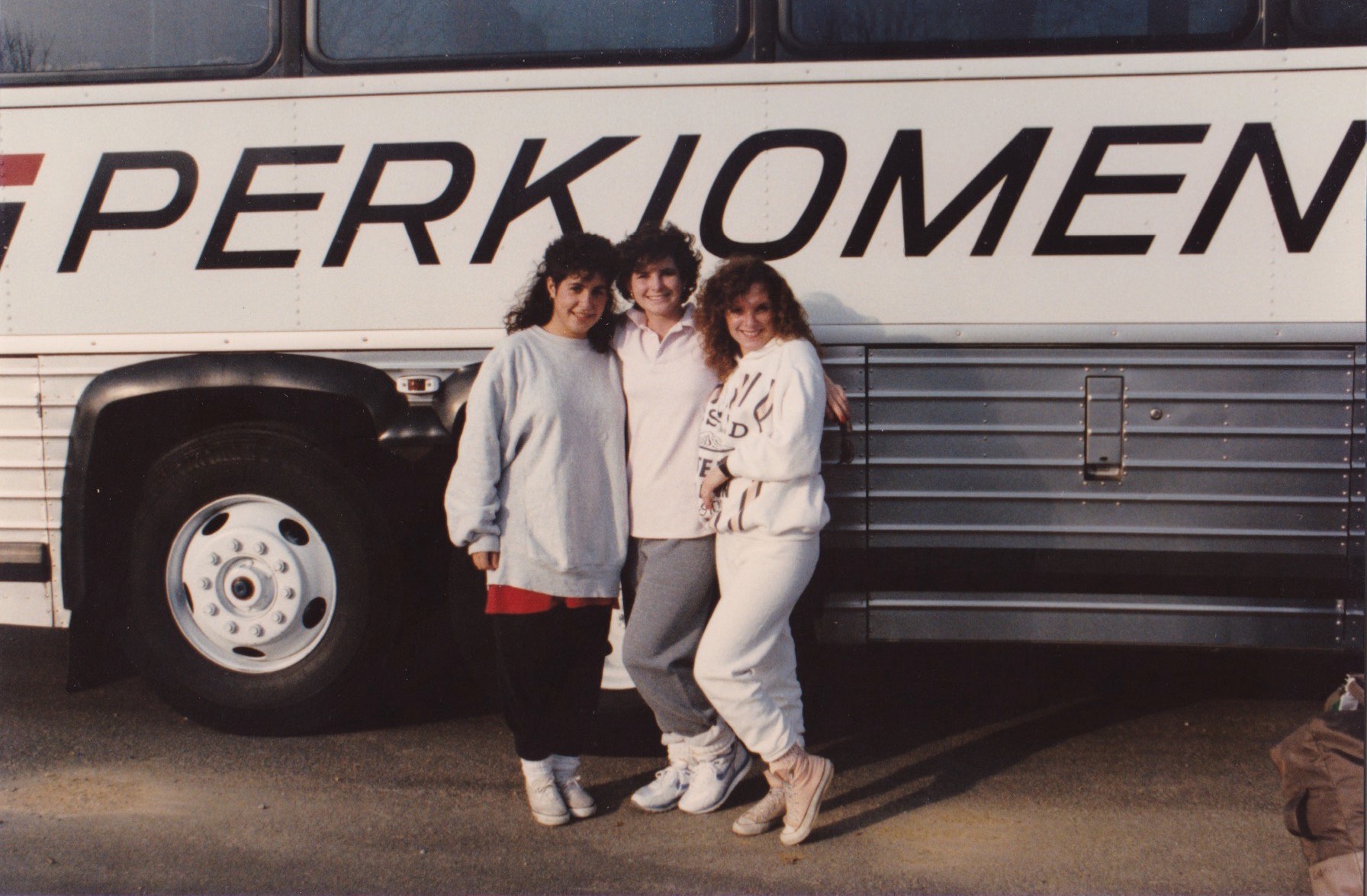 I’m in the center.  Notice the socks.

It was the spring of 1988.  I was a senior in high school.  Whitney Houston, INXS and Rick Astley topped the charts.  White Keds, scrunchie socks and big hair were in.  I was just about to turn 18 and had travelled as far north as Lake Champlain, NY and as far south as Orlando, FL but had never been on an international flight.  That year, my French teacher organized a school trip to travel to France and England along with another brave teacher.  (God bless, Madame Bunt & Mrs. Whats-her-name!)  After a canceled trip to Russia two summers before, I was anxious to spread my wings and travel; Mom gave the greenlight.  Two of my absolute besties (still to this day) also came along on the trip, Tara and Stef.  I think, in total, there were about a dozen of us.  All girls.  All juniors and seniors at Plymouth Whitemarsh High School (shout-out COLONIALS!). 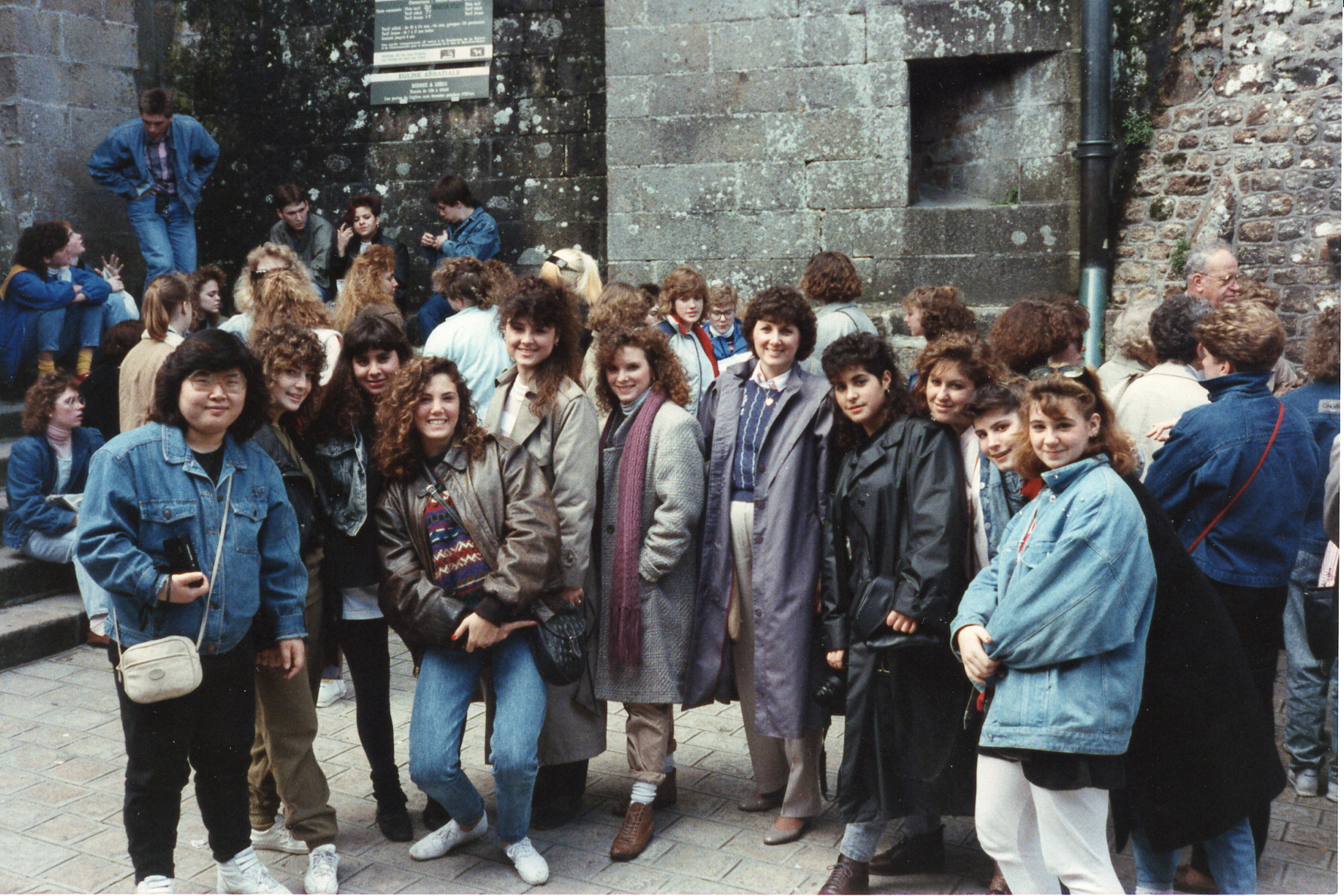 Our sainted teacher, Madame Bunt, fifth from the right

Our first stop was London.  By day, we toured the city and surrounding areas on foot and by bus.  I’m sure we saw lots of cool stuff, but honestly, we were looking for cute boys on the walking tours and mostly slept on those long bus rides to make up for the nighttime activities.  Speaking of… 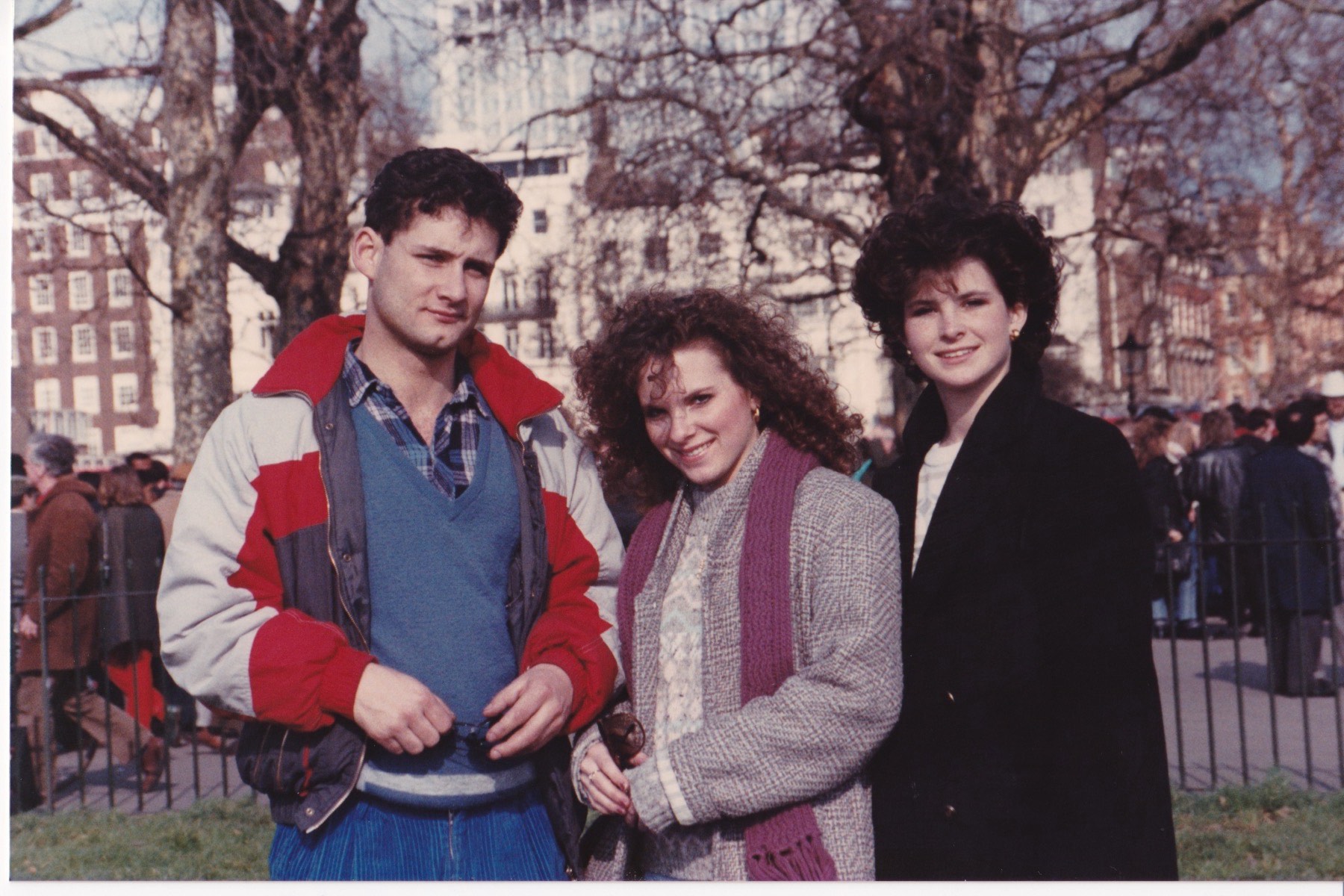 One of Tara’s boyfriends…NOT Simon!

One night in London (well, actually, every night in London), we went out after dinner in search of pubs, clubs and shenanigans.  After a few failed attempts at finding a dance club, we stumbled into the King’s Head Tavern.  You may have been there.  I think there are approximately 310 King’s Head Taverns in the UK.  It was crowded and lively and just what we were looking for.  I took the drink order from our gang of four (Tara already had an English suitor, Simon…ROMANCE!):  two G&Ts and two beers.  I waited in the sardine-packed space in front of the bar until the bartender gave me the nod.  It was loud, so I held up my fingers for the two and two as I screamed the order.  The bartender gave me a funny look at first, but then went off to get the drinks.  When he came back, I asked, “Did I do something wrong when I did this (holding up my two fingers)?”  He nodded, yes.  “Should I not do that anymore?”  Yes, he nodded again.  Hmmm…  I apologized, paid, thanked him and took the drinks to my crew.  I immediately asked Tara’s new boyfriend about the hand gesture.  “Simon, what does this mean?”  I held up my two fingers, but not facing him like the peace sign, but with the back of my hand/fingers facing him.  Simon immediately responded, “F%$* off.”  Huh.  “Well, what does this mean,” I asked, flipping him the bird.  “Up yours,” Simon answered.  I mulled it over for a bit, then turned to my friend Stef and pondered, “I wonder why this (back of hand) means “F%$* off” but this (peace sign) doesn’t.  Without missing a beat, Stef looked at me, holding up her middle finger, but with the palm of her hand/front of the finger facing me, “Does THIS mean anything to you?!?!”  We busted out laughing and to this day, when one of us does something that irks the other, we shoot up our middle finger in this reverse fashion and say the now famous line.  LOL!  (On a later trip, I also learned not to make the “OK” sign with your hand in Brazil.)  INTERNATIONAL INCIDENT AVERTED! 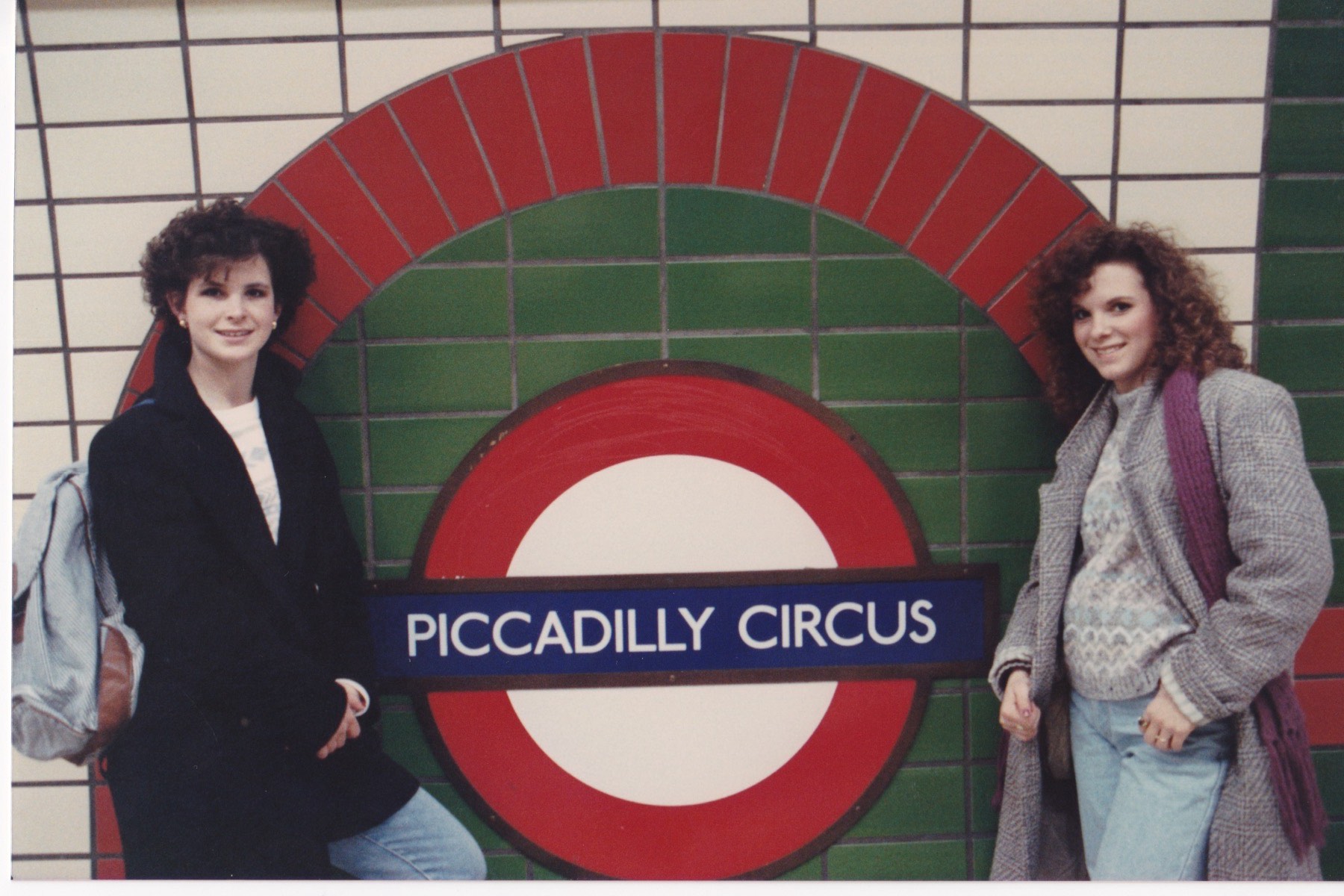 Shakespeare’s house, Harrod’s, Speakers’ Corner, the Hard Rock Café, the Tower of London, Tower Records, other stuff I can’t remember.  It was a whirlwind four days travelling around England before we headed to Portsmouth to catch the ferry to France (the Chunnel was still six years from being finished).  Simon was there to bid us farewell.  (Tara and Simon are still pen pals to this day.  True story!)  The ferry ride was dreadful.  The sea was angry that day, my friend.  People were tossing their cookies left and right on the 3-hour journey.  Memories… 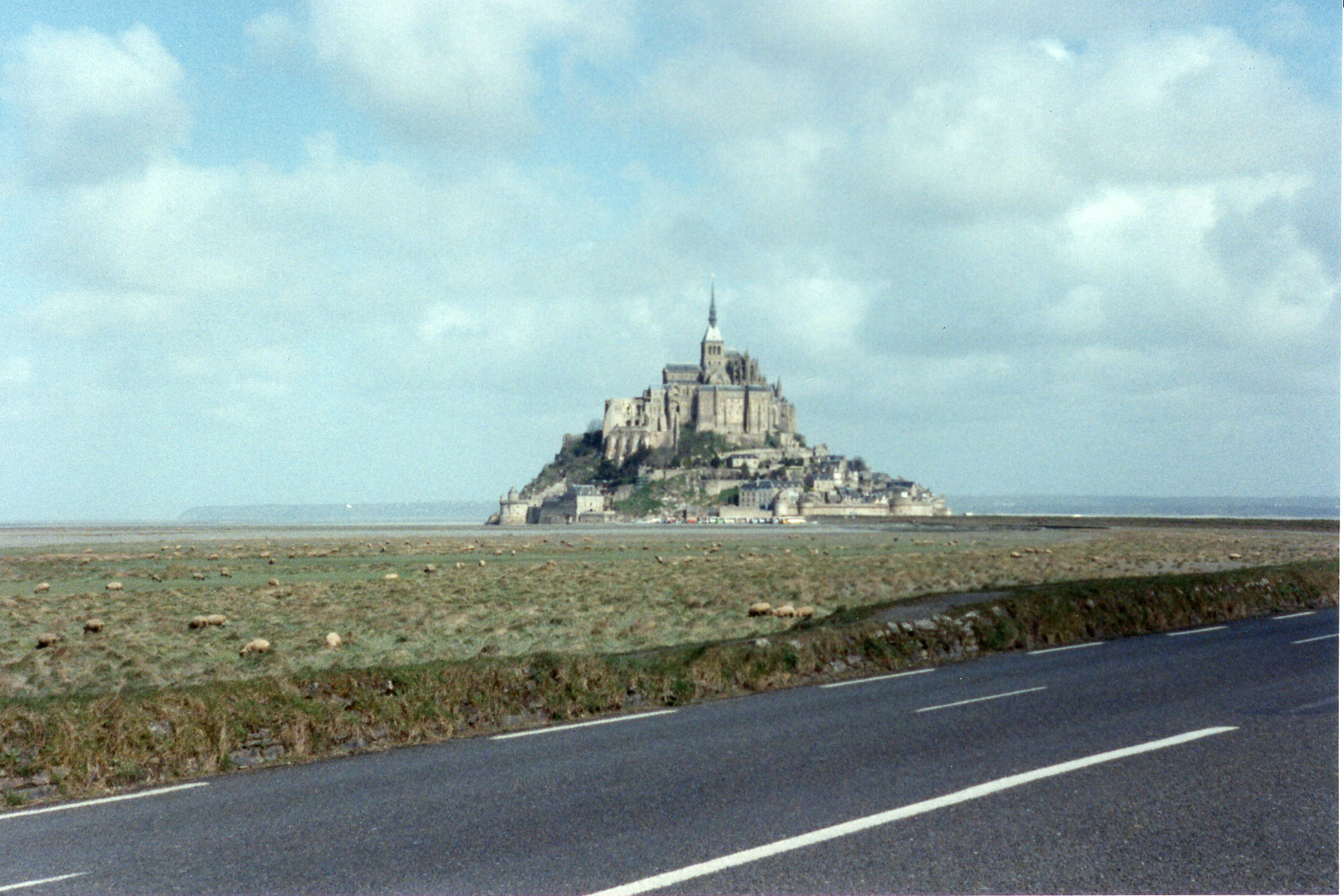 One of the first places we visited in France was Mont-Saint-Michele, the UNESCO World Heritage site and tidal island commune near Normandy.  Mont-Saint Michel has a fascinating history that I’m sure was shared with us by our tour guide, but I may or may not have been napping at the time.

I do remember the bus ride along the long, sandy road that led to the rocky island.  Our tour guide warned us not to be late for the bus at the end of our visit.  The tides wait for no one and they would leave any stragglers behind!  My two indelible memories from that day were lunch and the abbey.  Rather than a group meal like we had most days, we were left to fend for ourselves for lunch.  I don’t know who, but someone told us that Mont-Saint-Michel was known for omelets.  So we had omelets!  Our high school French wasn’t great so we couldn’t figure out all the specialty items on the menu.  We all got plain omelets and they were delicious!  They were like eating yummy, eggy clouds…so light and fluffy!  To this day, I still strive to make omelets as perfect as those. 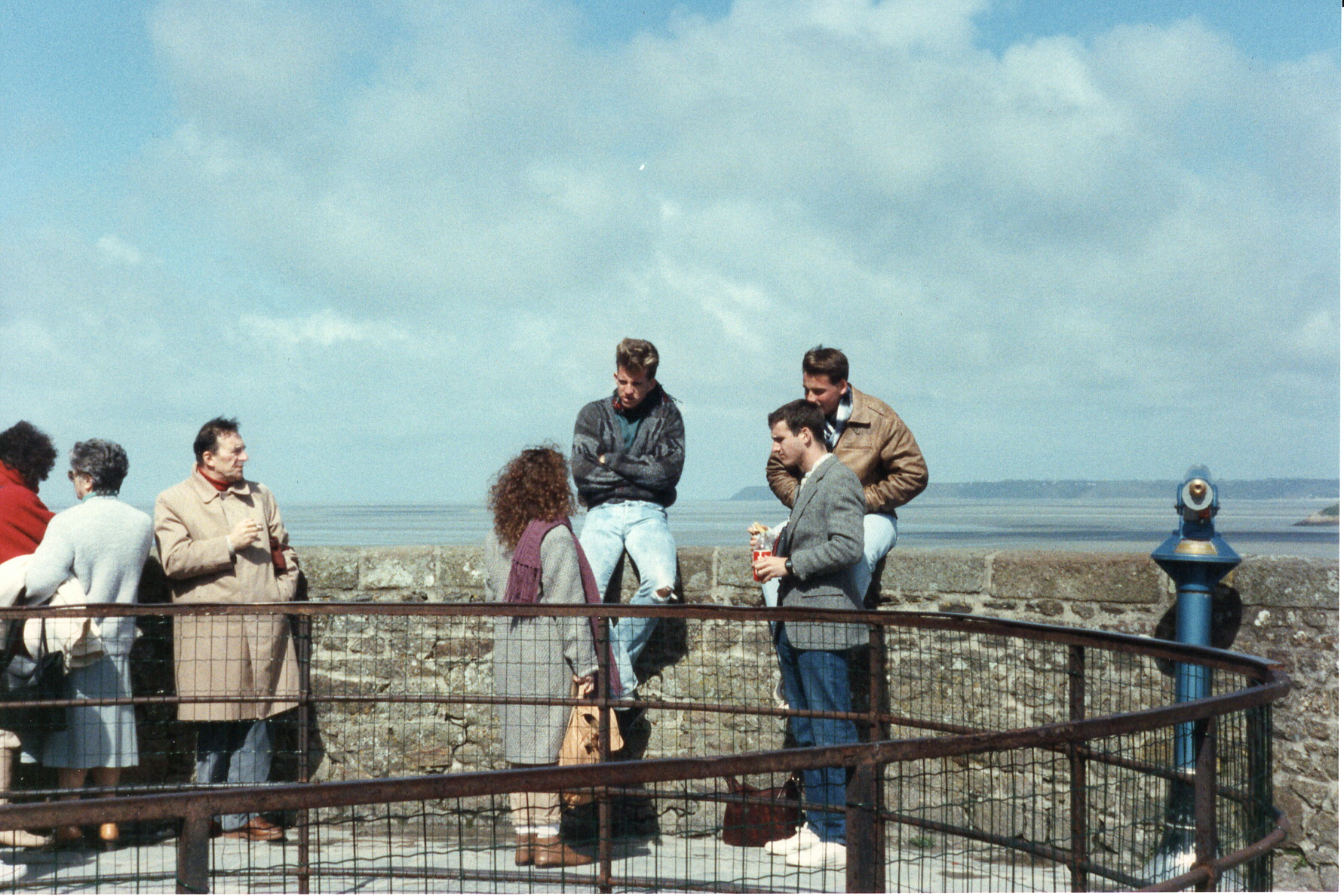 The other vibrant memory from that day was the awesome abbey.  We wandered around for over an hour, exploring the different rooms and nooks and crannies.  At one point, we came out to a rooftop overlooking the bay.  It was a pretty awesome view!  As we peered over the edge to look down on the tiny town below and the sandy vista beyond, I noticed a 3’ x 3’ pillar that topped out just below the wall.  So, being a completely idiotic 17-year-old, I climbed over the wall and stood on the pillar.  To those on the other side of the wall, I looked to be floating in mid-air.  I can’t believe how stupid this was and thank goodness that A) I didn’t get hurt, and B) there was no social media in 1988.  I surely would have been one of those Darwin Awards runners-up! (NEAR DEATH EXPERIENCE!)

One thing I didn’t mention earlier: Our tour wasn’t private.  There were actually two other groups traveling with us.  One was another group of high school students from Ohio and the other group was a bunch of what I remember to be middle-aged folks from Arkansas.  But who knows, they were probably in their 30s.  The other high school kids were also French students, so the younguns knew enough of the language to ask where the bathroom was or how to order a croissant or a beer.  But the Arkansas crew did not speak any French.  Example:  It was one woman’s birthday during the trip.  At dinner that night, they brought out a cake for her.  She was very touched and stood up to thank everyone.  (Said with a drawl) “I’m supposed to say sumthin’ like ‘silver plate!’”  We lost it.  Along with the “Does THIS mean anything to you?!” quote, “silver plate” is the next most quoted.

The last few days of the trip were spent in Paris.  Stef kept a journal during our travels but stopped journaling before we got to Paris, so my memories are a little foggy.  But we did visit all the famous sights (the Louvre, Eiffel Tower, Notre Dame), took naps on the bus, looked for cute French boys, climbed on statues, ate numerous Nutella crepes from street vendors…the typical tourist itinerary.  (I also have no less than 25 photos of the Rose Window.  Why???)  Then, after our 10-day European adventure, it was home to Philly, brimming with stories and a newly ignited wanderlust. 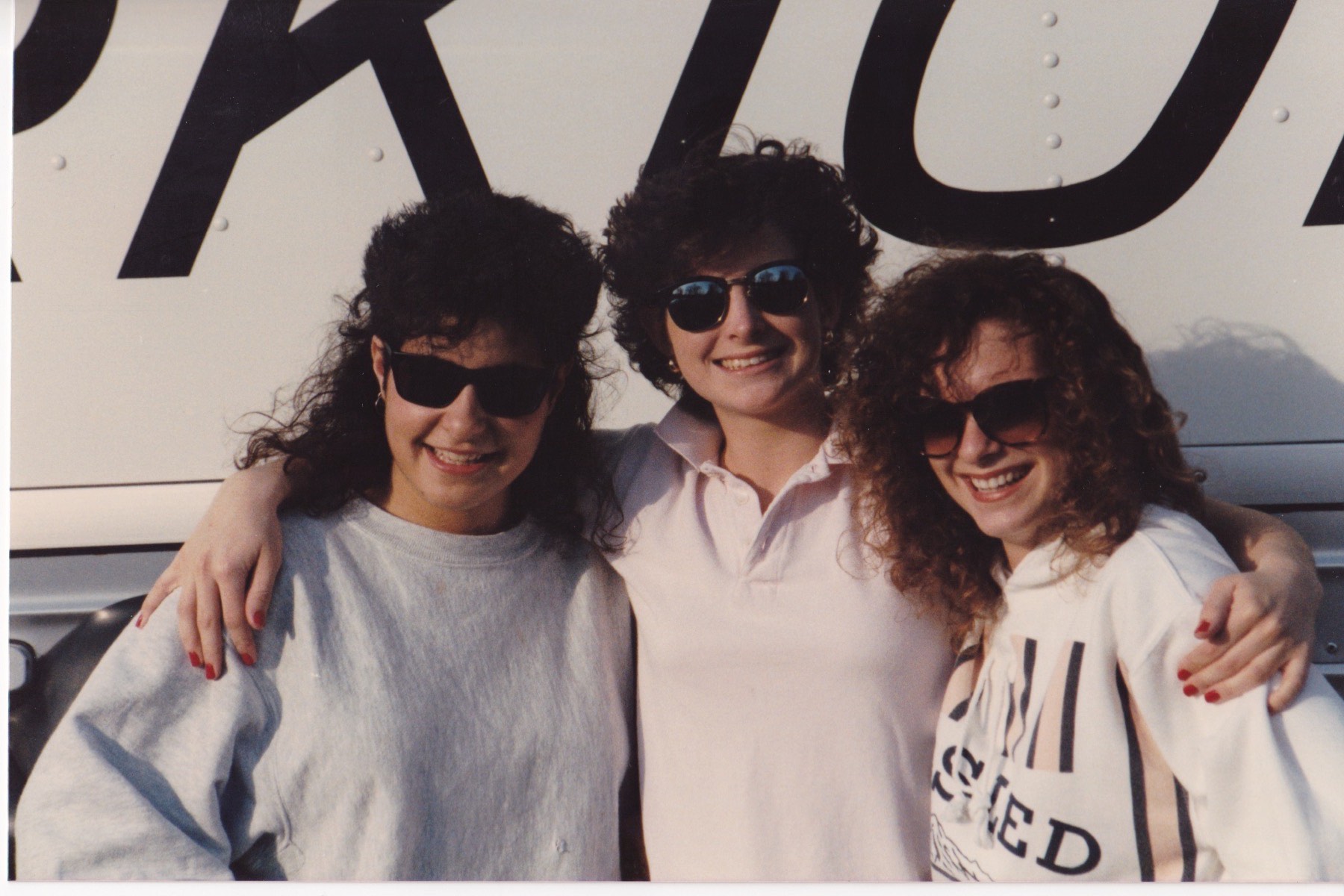 Since that first trip to Europe over 30 years ago, I’ve been on hundreds of international flights and have travelled to over 60 countries worldwide.  And just three years ago, I finally landed the perfect job at CIRE Travel where I get to talk about and market luxury travel every day.  A dream come true!

P.S. Mom, if you’re reading this, it was Tara and Stef who did all the scary/bad stuff.  I took poetic license here to make the story more exciting…  Or did I???   INTRIGUE!